When you start with a strong foundation, you can go anywhere and do well. Starting as early as possible, with an amazing education is key. We both believe that to the core. 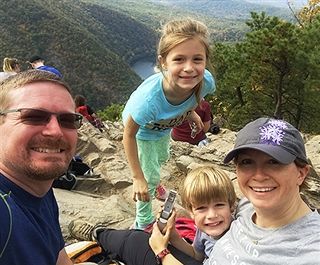 When James and Sarah Heck decided to participate in The Peck Promise Campaign, a naming opportunity in the Deetjen Kindergarten seemed a perfect fit.


“We knew we wanted to play a role in this campaign even though we’ve only been here for four years,” Sarah said. “We felt such a great connection to Peck from the very beginning and from our first few days in kindergarten.”


In fact, just one week into daughter Samantha’s first year at Peck, while entering their car for pick up, she exclaimed, “You know Mom, they also have a thing called ‘AfterSchool’ here. I could stay longer. That would be amazing!”


Then, four years later, son Joseph made a similar endorsement when he announced he would refuse to smile during his last month of kindergarten because he was so sad the school year was drawing to a close. This was the same Joseph who, one year prior, asked permission to drop out of preschool to start at Peck after witnessing his older sister’s passion for school.


Watching their children fall in love with learning at the very beginning of their formal education was a dream come true. The Hecks are true believers in the value of the K-to-8 model, and they understand the importance of building a strong foundation in early years.


“When you start with a strong foundation, you can go anywhere and do well. Starting as early as possible, with an amazing education is key. We both believe that to the core,” said James. “That foundation will set them up to be great. Having a wonderful space and amazing teachers at that early stage and developing that early passion in kids is critical. We wanted to give them the right tools as soon as we could.”


Beyond their strong belief in Peck’s K-to-8 program, the Hecks are supporting the campaign because they are impressed with the school’s evolving master plan. Although the new Peck Commons looms large as the new community hub, there are many subtler aspects of the campaign that impressed them equally.


“I feel like every single part of this campus was thought about and imagined. There are so many amazing and smaller changes that will facilitate collaboration amongst teachers and students,” Sarah said. “We didn’t feel like Peck was just knocking down the Old Gym and constructing a new building. After you see the whole plan you realize that literally every doorway and space was considered to improve learning.”

I didn’t expect Peck to be the real family that we discovered. As parents, we’ve made such amazing friends here. Everybody feels like they are in this together. Everybody puts 110 percent into everything here. Yes, we pay tuition. But I feel like we’ve gotten so much more out of it than what we put in. The teachers, the parents, everyone makes us feel like we’ve become part of this amazing family and you want to make it as good as it can be for whomever comes next.
That desire to make the world a better place extends beyond just the Peck family and community. Both Sarah and James work closely with technology, but they have a commitment to breaking away, getting their kids into the wider world, and out of their comfort zones. They enjoy the outdoors, hiking, fishing, and even spent last spring break trekking into a section of the Grand Canyon.

As James explains, “We want our kids to be self-sufficient, but also to realize they are part of this bigger world. We want to make sure they do everything they can to get outside themselves and help others.”

The Peck Kindergarten underwent a transformation last year in the early phase of the campus master plan. The design took its inspiration from a garden and the colors and palette reflect that theme. This was intentional because Kindergarten at Peck is where the original seed is planted – a seed that blossoms and transforms itself throughout the kindergarten to eighth grade journey.

How fitting that the Heck family, with their passion for early learning, growth, and nature, chose this wonderful kindergarten space as a symbol for their commitment to The Peck Promise Campaign.

Questions?  To find out how you can be part of The Peck Promise Campaign, contact Lauren Spirig, Campaign Director, at 973-539-8660 x135 or lspirig@peckschool.org.